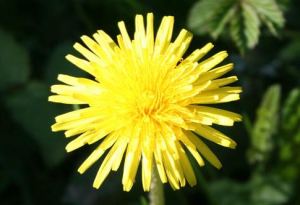 Ah!  Spring is just 6 weeks away here in the Northern Hemisphere.  I can hardly wait for the warm weather.  And the Food Babe (Vani Hari) can’t wait to start digging weeds out of her yard and making juice out of them.

Incredibly, in her article “Super Detox Juice”,1 Vani argues that the humble dandelion can be used to detoxify and beautify your body–inside and out.  Well!

The only problem is, by Food Babe’s own logic, drinking dandelion juice will also give you cancer!

How can this be?  Well, to explain, we’ve got to flash back to one of the Babe’s most notorious slander wars: the infamous Starbucks campaign.

Ms. Hari seems to be perpetually enraged–enraged I say (!)–that Starbucks pumpkin latte contains a coloring composed of 4-Methylimidazole (“4-Mel”).2  She uses the International Agency for Research on Cancer (IARC) as her source for the claim made in the following info-graphic:

The Babe grossly misrepresents the dangers of 4-Mel, which is only classified as a “group 2B” carcinogen by the IARC.  I’ll explain the group “2B designation” in more detail momentarily (don’t get scared), but for now please keep in mind these two very important points:

OK, so what does this have to do with dandelions?

Thank you for asking!  Botanical experts who’ve analyzed dandelions have found that they contain a compound called caffeic acid.4,5,6

So let’s go to the same list from which Food Babe pulled her 4-Mel Starbucks reference and see what else we might find there (queue ominous sounds of thunder):

Caffeic acid, a group 2B carcinogen, is found in dandelions!

Why oh why is it OK for Food Babe to wage a two-year social media, print, and television campaign against Starbucks because of a group 2B carcinogen in their pumpkin latte, but then recommend making a juice out of another group 2B carcinogen?  She has nearly a million followers on Facebook.  Does she care about their well being?  Does she ever actually investigate the food and products she pushes?  Or is she just trying to sell a book with recipes and health advice?

She asks this about a drink containing a group 2B carcinogen:

“Wouldn’t it be nice to walk into a Starbucks and order a drink without potential cancer-causing additives and to know exactly what you are drinking?”2

So why is she saying this about a juice that contains a group 2B carcinogen:?

“[…] one of the most healing greens you can buy […] proven to reduce swelling, bloating and stimulate the digestive system to release toxins. You can say bye bye to water retention after travel, a heavily salted meal or eating too much.” 1

Could the answer be that she’s making money from the advice in the second paragraph?

I think the great Vince Lombardi said it best… 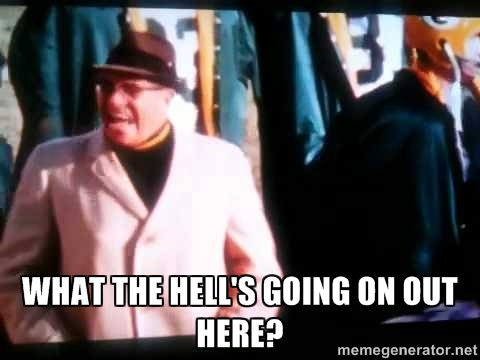 I’m not a doctor or chemist but I’m not too worried about group 2B carcinogens, given that other items in this same group include coffee, pickled vegetables, talc body powder, and the professions of firefighting and carpentry.3

If you want to eat the weeds from your yard, be my guest.  Just remember that Vani says to chew your juice–don’t drink it. 😉

Image Credits
Dandelion image by Kate Jewell, from Wiki Commons.  Used under Creative Commons Attribution-Share Alike 2.0 Generic License.  The image creator does not necessarily agree with the views expressed by the author in this article.

Food Babe screen snapshots are used in accordance with Title 17 U.S.C. Section 107, commonly known as “fair use law”. This material is distributed without profit with the intent to provide commentary, review, education, parody, and increase public health knowledge.

Homer Simpson image is used in accordance with Title 17 U.S.C. Section 107, commonly known as “fair use law”. This material is distributed without profit with the intent to provide commentary, review, education, parody, and increase public health knowledge.

Vince Lombardi/Green Bay Packers image is used in accordance with Title 17 U.S.C. Section 107, commonly known as “fair use law”. This material is distributed without profit with the intent to provide commentary, review, education, parody, and increase public health knowledge.