Vani Hari, Queen of Hypocrisy, published a meme yesterday asking why General Mills donated $1.1 million to fight mandatory GMO labeling, when they “could have fed 350,000 low income children in Minnesota instead”.1

Vani, how do you feel about your affiliate, Dr. Bronner, donating nearly twice that amount ($1.8 million) to support the labeling?2 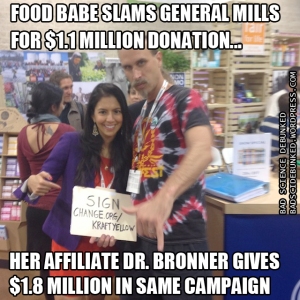 Here’s Food Babe’s original meme.  You do the math.  If GM could have fed 350,000 low income kids for $1.1 million, how many children could she and Bronner fed with their $1.8 million? 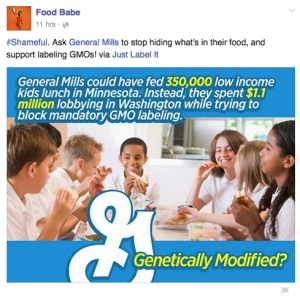 Vani Hari slams General Mills for a smaller donation than her affiliate company made in the same battle. 2     (click/enlarge)

Why doesn’t Food Babe criticize Dr. Bronner?  Let’s take a peek at her online store and see if we can find any clues.3

Food Babe (Vani Hari) is smart enough not to bite the hand that feeds her. (click/enlarge)